Preview: An Enemy Within (Out Now)

On June 9, 2014
By admincontrol
Category: Now and Then, Uncategorized
no comment

The voice inside Lieutenant Matt McDermott’s head taunted him, driving him crazy, as he watched for moving figures on the screen. It sent a gnawing chill, like a hunger, churning in his gut. It’s just like a video game, man,’ it kept repeating. ‘That’s all … just a crazy freakin’ video.’

His eyes reached straining point, fixed on the thermal viewer monitor inside the Bradley Fighting Vehicle. Ahead, he could see ghostly shapes of low-roofed buildings as the vehicle inched slowly towards the Baghdad hamlet. An insurgents’ training camp, intelligence said.

‘Take them by surprise if possible – and hit ’em hard,’ the major had instructed back at base, dispatching two Bradleys, nine men in each, on their first engagement. A pincer movement.

And McDermott, nerves at screaming pitch since leaving HQ, was in command. His rookie operation. He fingered the crucifix around his neck and prayed: Dear God, help us all get through this. 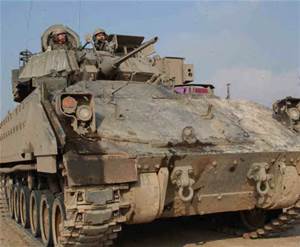 The Bradley came to a halt, now in range. He ordered his driver, Bobby-Jo, to cut the engine. Now they switched to silent watch mode, the only sound the faint hum of battery power.

Still no movement on his screen. What was he waiting for? He’d visualized coming under attack as they’d drawn closer, maybe a barrage of mortars, RPGs, Kalashnikovs. Then returning fire with the Bradley’s superior force.

But he had the element of surprise. The enduring simplicity of battle throughout the ages. Invaluable. The perfect offensive action scenario – just as they’d said at the Academy.